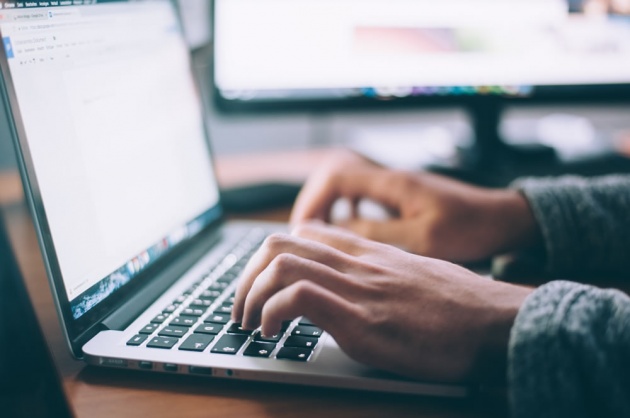 This is by far the biggest of all the articles in my COVID COMMENTS blog, the matters contained in this article affect every other COVID topic that I discuss. You will see where one state "guessed" the daily number of tests conducted.

The world-wide COVID-19 response began with rumours and innuendo, suggesting the likelihood of laboratory origins of the virus, leading to wildly exaggerated predictions based on computer modelling with no scientific basis.

Australia’s first COVID-19 case was diagnosed on 25th January and our first confirmed death was on 1st March. As a communicable disease, the daily count of new cases had the attention of all Australian governments and their health officials, but they became really concerned by the rate of escalation around 9th or 10th March.

On the 16th March, the Australian government was presented a computer model report which predicted that up to 60% of Australians (15 million people) would contract the disease and up to 150,000 of them would die. 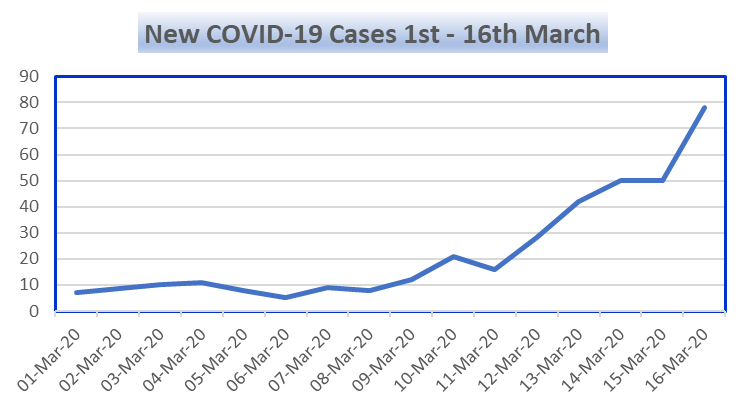 Given a ten-fold increase in the number of daily cases within little more than two weeks, and given that other countries were being presented with the same frightening computer modelling, the national cabinet had little choice but to move quickly and hard to slow down the exponential spread of the virus.

The Australian government declared a human biosecurity emergency the next day, banning indoor gatherings of more than 100 people and raised international travel advice to “do not travel”.

Of course, that original modelling has since been universally debunked!

But it is not the only erroneous information that we were expected to rely on.

Another hugely erroneous “expert” analysis, which had been updated on 19th March, was presented to the national cabinet predicting that Australia would run out of ICU beds when the number of cases reached 44,580 and that number will be reached between 7th and 9th April.

Obviously concerned by this prediction, the government moved to ease the strain on medical resources by “pausing” elective surgery, announcing on 23rd March that all non-urgent elective surgery would be suspended as of 1st April.

This was wrong on many levels:

Most of the statistical information that I see is through two websites, Daily COVID-19 Health Alert and COVID-19 Data. One of these reference sources enables the calculation of total active cases as at the last reporting day but does not show the number. The other source shows the number of active cases as at each day since 16th March and also has that data itemised by source of infection as at each day since 21st April.

As at 6th June, there was a discrepancy of 10 cases between the summary that we are given each night on television (460 cases as at 6th June) and the detailed “by source of infection by state/territory” (450 as at 6th June).

I have compared these two different results for the same matter back to 11th April. From 11th to 30th April, the figures were out of whack with each other on the first 10 of the 20 days and in sync with each other on the last 10 days. There has only been one day since 30th April where the two sets of figures have the same total, the largest single day variance being 410.

Every day, data is supplied about new COVID cases, sorted by source of infection.

Each new case is classified as one of the following:

If the data being fed into each category is only moved out of uncertain origin when it is confirmed as being relevant to one of the certain origins, there can’t possibly be any negative numbers in the first two categories. So “confirmed” to the record keepers doesn’t mean what it normally means!

Furthermore, the daily report issued by the Federal Dept of Health and used by all news sources shows (amongst other data) the cumulative number of COVID-19 tests conducted by each state and territory. I have monitored this data since 11th April and have detected the following “suspect” data in respect of tests.

Whilst all other states and territories have consistently reported absolute numbers of tests, Victoria used whole thousand numbers as guesses until 28th April, when they finally declared a definite number (104,000 on 27th; 109,049 on 28th). But the doubt as to the accuracy of information continues, with the Victorian total tests up to 5th June reported as 542,958 and up to 6th June the total number dropped overnight by over 12,000 to 530,816 – with no explanation. This saga continues, the total number for Victorian tests up until 7th June was initially reported as exactly the same number (542,958) as 5th June but was subsequently changed.

Between 1st and 21st June, Queensland's reporting of daily new COVID tests reflected a total of 79,251 at a daily average of 3,744 tests. Are we really expected to accept, without question or explanation, that the very next day, 49,207 tests were conducted, but the day after that (23rd June), the number of tests reverted back to a "more normal" 3,635? We know that a daily count of over 49,000 tests can't possibly be correct, but we don't know whether somebody accidently slipped in an extra digit, or whether it is the correction of significant and systemic under-reporting over a long period.

Are we also expected to believe that the Northern Territory's test count over the five days to 23rd June was 155; 174; 116; 33 and 312? Western Australia did not report any test numbers for 16th and 17th June, with a "spike" on 18th June, and it has failed again to make any report for 27th or 28th June. Perhaps there will be another "spike" on 29th June, but in the meantime, it's yet another example of dodgy data.

The number of “active cases” (total cases, less recoveries, less deaths) in Australia peaked at 4,909 on 6th April, but by 11th April (the day when I believe we should have begun relaxing the restrictions), the number had dropped to 2,980 and continued to drop steadily during April, ending that month with less than 950 current cases.

This is a graph of active cases from 1st May, showing a steady decline until 11th June when the number of cases dropped dramatically. 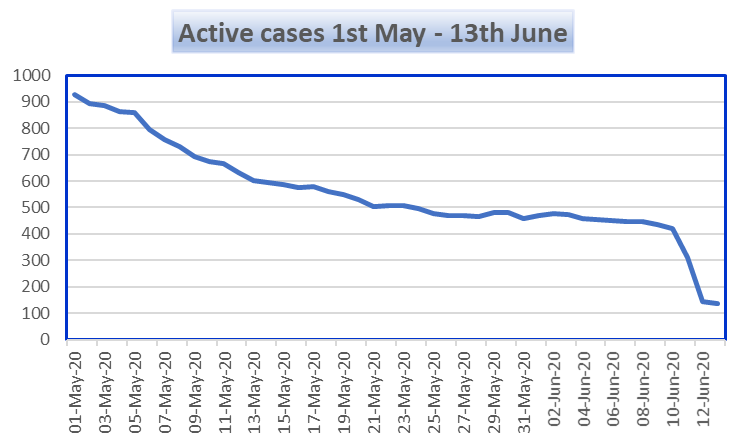 The drop was caused by NSW reducing their count by 253 cases; removing from the count any cases which were more than 6 weeks old and not reported as a death or recovery. There was no information to explain why this happened in two instalments, instead of just one. NSW made a futher change to their reporting methodology on 25th June, reducing the open case time from 6 weeks to 4 weeks, knocking another 90 "active" cases out of their count.

Incredibly, the national data has not been adjusted to reflect this change - as at 25th June, the national data showed 512 active cases whilst the adjusted figure should have been 174. Equally concerning, the deleted numbers have not been added to the recoveries total, thus the corrections of the active cases dodgy set was at the cost of making the recoveries set dodgy.

Given the rise in new cases experienced in Victoria from 14th June, I monitored the data as at 22nd June - total cases and total deaths for both reports were in sync; with 7,474 case and 102 deaths. Active cases are shown in the Federal Government daily summary as 469, whereas the adjusted count was 221. The "official" Recovered case count showed 6,903, with the adjusted count showing 7,151 recoveries. Still no correction - national figures for 28th June show 589 open or "active" cases, the individual state/territories' reporting shows a total of just 245 (7 in NSW, 2 in QLD, 4 in WA and 204 in VIC) - a variance of 344 cases!

Every day since 10th May, the data provided in respect of deaths and recoveries in Aged Care Facilities has a mismatch between the sum of individual states & territories and the total for Australia. Either the total recoveries are understated, or the total deaths are overstated, or one or more of the states has got it wrong - who knows?

The collection and dissemination of COVID data is the responsibility of the Chief Health Officer of each state and territory. This data is what they make their decisions on - in respect of marshalling resources, imposing, or lifting restrictions and closing or opening borders. It is also the data that we report to the rest of the world.

The Australian public has a right to expect, nay demand, that this data is correct. Well, these highly paid bureaucrats that have been granted the power to control our financial well-being as well as our health, haven’t been able to get unity in any endeavour.

The simple task of daily reporting of new cases, deaths, recoveries, tests, hospitalisations etc. is flawed, with Tasmania reporting each evening the data obtained up until 5pm that day, whereas all other jurisdictions report data today which is relevant to yesterday. The federal government reports cases according to residency, whereas other jurisdictions report by location, but for some reason, this gets changed every now and then.

The COVID-19 website that I use each day reports that since 23 May “federal figures are irreconcilable with remaining active cases in Western Australia and Queensland”.

The “as at” reporting time of each day has been varied on several occasions, thus understating or overstating some particular day’s activity.

It took until 5th April for all jurisdictions to report “recoveries”, but there are vast differences between the procedural determination of recoveries within jurisdictions:

VIC seems to treat cases as “recovered” 10 days after notification unless there is contrary information.

ACT, SA, and WA assess each patient by interview and then make their determinations according to “national guidelines”

QLD seems to treat cases as “recovered” 10 days after notification unless there is contrary information.

A grade-three maths student could tell that the final column must equal the sum of the preceding columns, otherwise it is gibberish.

We know that the first row below (as shown in the report in respect of the Gold Coast) can’t be correct, but we don’t know which of the three alternatives is the correct summation:

Sadly, it appears that those charged with the responsibility of reporting these things to the nation are either mathematically inept, or they simply don’t give a damn about the job they are supposed to be doing.

These fundamental errors say a lot about the lack of attention to detail given to the information disseminated to the public and used as the basis of important decision making.

Dodgy data leads to dodgy decisions which cause unnecessary hardship and concern for many people.

This is by far the biggest of all the articles in my COVID COMMENTS blog, the matters contained in t . . .

This is by far the biggest of all the articles in my COVID COMMENTS blog, the matters contained in t . . .